Behind the Page – Interview with Author Anne-Rae Vasquez

This month I am beginning a new series called “Behind the Page” where I interview up-and-coming authors who deserve attention. 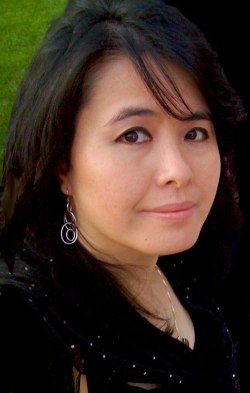 Anne-Rae Vasquez is an Indie author and filmmaker from Vancouver, BC. She has published half a dozen books and novels which include YA fiction, poetry, web design and cooking. She wrote AND directed Almost a Turkish Soap Opera, which won a slew of Indie film awards. She also blogs, reviews books, cooks, raises a family and … well, you get the idea – she generally puts most people’s work schedules to shame. I had the pleasure to first make Anne-Rae’s acquaintance on fiverr.com when she graciously agreed to put together a very cool book trailer for my latest novel (which, if you feel so inclined, you can see here). When I suggested that perhaps she might not have charged me sufficiently for all the terrific work she did, she replied ‘Oh no, you paid me enough’. She obviously has talent to spare and is generous to a fault with her fellow Indie authors. Let’s find out more about Anne-Rae Vasquez.

1. What’s it like to live in a communist country?

Actually Canada is a democracy although the political structure is quite different than the United States. Canada has far too many political parties, which makes the election process somewhat ineffectual. We do have a government administered health care system but it is NOT free, with the exception, I think, of a handful of provinces.

Your question highlights what many people don’t understand: the differences between Communism, Socialism, and what-have-you, thus labeling all of this under Communism.

2. Beatles or Rolling Stones? Or is it more like Partridge Family vs. Monkees?

Beatles. Can’t believe you had to ask! Although for a brief period of my youth, I did have a thing for The Monkees, probably because they were on TV every day.

3. Almost a Turkish Soap Opera? You raised money to write and film this fascinating movie (which readers can watch on Anne-Rae’s site here), and filmed the dang thing yourself. You’re a ‘regular’ person, meaning you don’t own a film company and you work for a living and raise a family. What drove you to undertake such an effort? 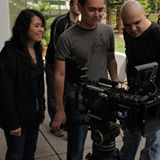 Directing with a smile

I did not film “Almost a Turkish Soap Opera” by myself. I wrote the screenplay and directed but the production was handled by Joseph Khalil (Sababa Productions) and the wonderful cast and crew made the film something I’m proud of. I have been working behind the scenes in film production since high school and always dreamed of one day making and directing my own movie. The experience was a springboard to other creative projects.
4. Cupcakes or Cheetos?

5. Doubt. Cristal. Resist. All are single word titles of yours that pack a punch. What’s in a title? How important is title to you as a writer? Do you agonize over them?

A good title that people can remember is essential. It needs to be catchy but also reflective of the story. It’s easier for people to search “Doubt” on Goodreads than “Doubting the Reality of It All”, don’t you think?

6. What made you realize you were a writer? And when?

I knew I was a writer in grade school, when my teacher asked the class to submit one paragraph to describe what we did on the weekend. I submitted a novella.

Anita Daimant, author of the “Red Tent” (a story told in the eyes of the women of Biblical times). Malka Marom, who wrote “Sulha” (which means “forgiveness” in both Hebrew and Arabic) and Khaled Hosseini (“The Kite Runner”). These writers craft culturally rich stories that show the reality of life from the perspective of people the mainstream media tends to ignore.

8. What makes it worth eleven dollars (US) for you to sit in a theater (theatre to you) with your shoes cemented to the floor with nacho cheese?

What doesn’t, you mean? ZERO movies in a theatre (theater:)). I prefer to watch at home on my 55″ flat screen TV with my family, eating popcorn I pop with real butter. Actually I’d rather watch an entire TV series in a marathon sitting, which you can do now. Stories told in an hour or two just don’t do anything for me anymore. There is so much more creativity in many TV shows these days and they are visually equal to what you’d see in the theatre.

9. The hardest part of writing a novel is … [fill in the blank]

10. ‘Writing is a mental disorder’ says one of my writing mentors (Jim Frey). What say you?

Writing is where my nightmares and dreams find immortality.

For me water and ski don’t mix. For fun and relaxation, I go on film shoots.

12. Social media? How important in promoting your work? How much is too much?

I actually hate promoting anything. I prefer to share with others as much as I can which is why I did the fiverr gig. My editor (who doubles as my promotional manager) advised me to raise money for Doubt via kickstarter but I balked at the idea of begging people to fund my book. So I decided to leverage my film making experience to assist others and finance projects that way. An author acquaintance paid over $700 for her book trailer! When I saw the video, I couldn’t believe it. It looked like a high school student put it together. My fiverr gig costs a fraction of what my friend could have paid and provides an affordable alternative for authors.

13. You’re a techie by day. It’s no coincidence how many successful Indie authors are technically savvy. How important is this? Or does your day job just get in the way of creative stuff, like watching cat videos?

Techie means I can produce all my own work from A to Z. I don’t need to outsource book formatting or worry about who is going to make my promo videos. I often create my own book covers and it means more power to me and less expense.

14. How do you find time to write? How much do you write?

I only have a few hours a week but still manage to write two to three chapters. Then I meet with my editor and we do a rewrite together. She’s a tough Latina and sometimes we butt heads. But in the end the process feels great – magical.

15. ‘Doubt’ and the ‘Among Us’ series has just been picked up by Knopf Doubleday and you are now a multi-millionaire. What happens next?

I go and make a bunch of movies and at least one TV series, that’s what!

16. Sorry, I lied — trick question. But you have just won just *ten dollars* in a scratcher that you bought at a gas (petrol) station. What happens next?

17. Most thrilling moment as a writer?

Every time a new fan writes a review. They don’t have to like everything about the book but knowing that they immersed themselves in my world and then took the time to write a review, well … that makes it worthwhile.

19. If you were put in charge of Canada, what’s the first thing you would change?

People in charge are frequently puppets of the rich and powerful. The world of politics is not a place I want to be.

20. I’m enjoying “Doubt”, even though I have to move my lips when I read. What inspired you to write a YA book about video gamers?

One day one of my kids came up and asked me: “Mom, why do you write books that we can’t read?” That’s when I decided to write a book that my kids could share with their friends. They all love playing video games. Personally I wondered about the benefits of being a gamer. Were there any? But after sitting with my kids and their friends and watching them play, I saw a LOT of skills that can be used for the greater good. Then I asked myself: could gamers save the world? And the answer was … well, you’ll just have to read the book.

Anne-Rae, I and my millions of readers want to thank you for taking this time to let us get to know you a little better when you could have been baking baklava.

Thank you for inviting me … I actually made some baklava this morning … enjoy! 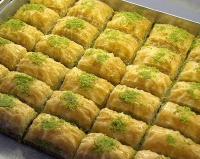 This entry was posted on March 18, 2014 by Max Tomlinson. It was filed under anne-rae vasquez, Behind the Page, Indie authoring, Interviews, on writing, Uncategorized, YA, Young Adult and was tagged with Turkish Soap Opera.