The Literary Chain Letter – aka ‘My Writing Process’

I’ve been tagged to tell you how I do what I do when it comes to doing what I love best to do: writing. Specifically, my writing process – or lack of one. But I’m happy to make something up. Well, I am a fiction writer.

For the trail of this writing process request chain see Mark Miller, who referred me, and whose entry you may read by clicking said link. You will discover that Mark can really write, not only because he’s good, but also because he writes non-fiction, which requires sticking to the facts.

I truly admire anyone who can turn the truth into something readable as I find it a little – er – restrictive. I’m like the Irishman who had such a respect for the truth that he was known to use it in emergencies. Anyway, I digress. Which is part of my writing process actually: digression. Call it exploration. Research. But, back to the truth – briefly – to quote my old writing teacher, the stalwart Jim Frey. (No, not that Jim Frey, who committed a disgracia on Oprah. Talk about not sticking to the truth.) I mean the Jim Frey of ‘How to Write a Damn Good Novel’, who said ‘if your story needs a BART station in Golden Gate Park, then there’s a BART station in Golden Gate Park.’ (There isn’t, by the way, for those of you who don’t live in the People’s Republic of San Francisco.) The point is, it’s FICTION. It doesn’t have to be true, just believable. And sometimes, the more outlandish, the more believable.

There are many approaches to effective writing.

I’m work-shopping a Noir novel at the moment, channeling the demons of Jim Thompson, Elmore Leonard, Graham Greene and Patricia Highsmith and corralling them into a ’70s biker novel with a woman bent on revenge, and I can’t believe my fellow work-shoppers are buying some of the things Colleen Hayes, who gets out of prison and goes hunting for her wayward teenage daughter, gets up to. They don’t seem to have issue with the ‘fact’ that a bascially nice person goes nuts with a shotgun, but more with the very basic aspects of character – motivation, capacity, growth – that affect all characters in all novels under development. Like they say, if you can make a reader (or viewer) believe a man can fly, they must want to believe it.

Like the man said, who wants to read about people who never really existed, doing things that never really happened? I do. And so do a lot of you. And I want to write about it, too. What an arrogant thought, really, thinking that someone wants to read something you just made up. But they do. If it connects. And, to do that, it has to connect with the author. So that’s part of the reason my writing process might seem so fluid. Because looking for inspiration, that little nugget, requires a lot of wild casting and hoping the line doesn’t get snagged in a tree. Or around your neck. But if it does – so what? Print is cheap. You’re not shooting a movie. Go big.

In my other life, the one where I make money, I’m a computer programmer, and one of the tenets of modern software development is to iterate. Start with something and keep refactoring it, until it works. Don’t shoot for perfection right off. To me, writing fiction and code have much in common that way. All programmers write code their own way too. 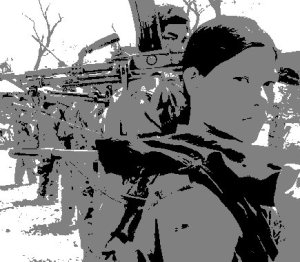 I like to write women protagonists. Why? I find them a great contrast to most of my bad guys (who tend to be guys) and I think that women characters can have a wider emotional range. They get away with a lot of things men can’t. I admire writers who can write dark sympathetic male characters. Case in point: Stephen King. In ‘The Shining’ his protagonist breaks his five-year-old son’s arm and the reader still identifies with him.

1. Don’t keep going back to the beginning of your draft every time you sit down in front of your computer (or pen and paper). Push ahead.

2. But do sit down at your computer (or pen and paper) as much as possible. Some people say every day but if you work for a living this may not be doable. But half an hour writing is better than half an hour not writing.

3. Be prepared to throw away most of what you write. Keith Richards jammed for hours – months, in many cases – to come up with a riff for one of those three minute gems. It was worth it. Segovia practiced for five hours per day. Write a lot and be prepared to write a lot of sh*t. It’s good enough for Henning Mankell.

One of the tamer Sasquatch Erotica titles out there.

4. Read as much as you can. Read what you want to write. For me, those are my heroes (Elmore Leonard, Patricia Highsmith) but I also read the odd classic and I even read some junk. I’m an American author and popular fiction (and culture) is ingrained in me. I draw the line at Sasquatch erotica however.

5. Work-shop your work. If you don’t, you’re an amateur. Listen to the critiques. If more than two critiquers make the same comment, they’re right. Sorry, Hemingway, you got to kill your darlings.

7. I like to write early in the morning, mostly because that’s when I have time but also because my mind isn’t clogged with mundane garbage yet. I don’t check my stocks before I write, read email, or do anything that pulls me out of the ‘fictive dream.’

9. I listen to all the critique but in the end it’s my story. I need to decide what happens. This is so hard but for me was the breakthrough that made my work better (IMHO). Trust your instincts. ‘Write from the fingertips’ Jim Frey says.

10. I write thrillers and mysteries. It’s important to stay within the genre, whatever genre you choose. Literary fiction is a genre, by the way. But by the same token, you need to break the genre, just a little, to make your story fresh.

11. I try to have fun and remember why I write. I get disappointed and frustrated just like everyone else but if the entire world isn’t in love with my books, that’s their problem. And it’s a first world problem to be wallowing in writer’s angst.

“My imagination functions much better when I don’t have to speak to people.” – Patricia Highsmith

12. I do quite a lot of research (hasn’t Google made research easier, everyone?) For my biker Noir novel, I read more than I wanted on the history of Meth in this country and all I can tell you is that fiction ain’t got nothin’ on the truth. I’m still trying to get some of those images out of my mind. Much of my research is on the page in early drafts but eliminated as I rewrite. Tip of the iceberg is what I aim for. Elmore Leonard is a master at including that one detail that brings a scene or character to life.

13. There is no such thing as writer’s block. As Jim Frey said, what would you say to a plumber who said that he (or she) had ‘plumber’s block?’ You’re a plumber. Get to work. If you can’t be wonderfully creative today, do some low-level self-editing. There’s always something to do to make your novel better.

So there you have it.

I want to call out three fellow authors I think are innovative and pass the baton, and hope they follow suit and tell us how they write. (It’s a chain letter. If we all do this the entire world will be inundated with blog posts about writing. And then what? A few million authors at the end of the chain will be stuck and the internet will probably break. But if my three chosen authors wish to participate I look forward to their secrets for success.)

If you write, I hope my humble thoughts have encouraged you in some way. We all do it differently but we all do a lot of it the same. What an arrogant thing to think that someone will want to read something you made up.

This entry was posted on June 22, 2014 by Max Tomlinson. It was filed under Indie authoring, on writing, Uncategorized and was tagged with #amwriting, anne-rae vasquez, elmore leonard, jill nojack, patricia high smith, stephen king, Tess Collins.